Despite progress in robotics, human intervention in hostile environments is a necessity, for example in space exploration.  In the foreseeable future, the International Space Station (ISS) will reach the end of its useful life, but at the same time, space agencies such as National Aeronautics and Space Administration (NASA) and European Space Agency (ESA) are looking toward new targets for human space exploration, including a return to the Moon and manned missions to asteroids and Mars.  Novel technologies have become available for missions that will be performed in close collaboration with robots, and accordingly new training techniques are required to prepare astronauts for their missions. 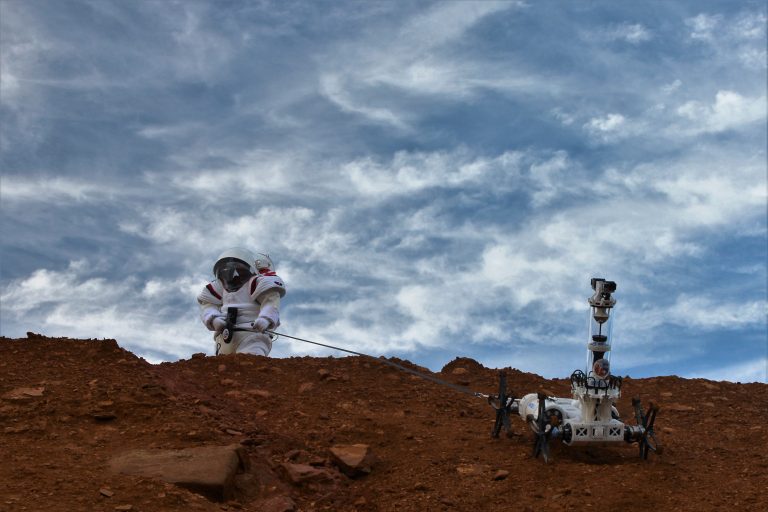 Practicing astronaut-robot collaboration in a rappel/abseil scenario:
the robot goes to “where no man has gone before” (Image: Alistair Nottle, AIRBUS)

Underwater environments can be used to simulate reduced gravity, while the geological and morphological conditions on the sea bed make it possible to move about in conditions similar to those of the Moon, Mars or even an asteroid.  Thus, astronauts may train under highly realistic conditions.  In the European research project Moonwalk, astronaut-robot interaction was evaluated on ground and immersed in water.  Different means for controlling an assistive robot were evaluated in an underwater ocean environment in the Mediterranean Sea near Marseilles at a site that resembles the morphology of a crater on the Moon at a depth of approximately 45 feet to simulate gravity as an astronaut would encounter it on the surface of our celestial neighbor.

One of the objectives of the project was to assess the efficiency of a team of two astronauts versus an astronaut-robot team.  Robotic companions in space missions are of particular interest when it comes to the exploration of dangerous areas.  The robot used in Moonwalk was a scout robot, able to explore caves and steep terrain, where one would not send an astronaut.  To perform such tasks, it is critical that the robot can be controlled in an efficient manner by the astronaut.  The stiffness of the pressurized suit and payload limitations call for new ways to control a robot.  In the Moonwalk project, several methods of robot control were developed and evaluated, including gesture control, visual follow-me functions and tablet-like control devices.  These local control methods are of importance especially in the case of future missions to Mars, where data transmission delays do not allow to communicate with the astronaut or to control a robot in real-time from Mission Control on Earth.  Such latencies were simulated, and methodologies to cope with these latencies were tested while the astronaut, in the underwater simulation, communicated with a control center in Brussels and at Georgiatech in the United States.  Hybrid control paradigms in which latency-sensitive aspects of the tasks, such as sensor-based interaction with the environment, were under local control by the astronaut and/or by the robot itself, and where only less time-critical aspects, such as providing high-level task instructions, were remotely provided by Mission Control on Earth, turned out to be particularly suitable. 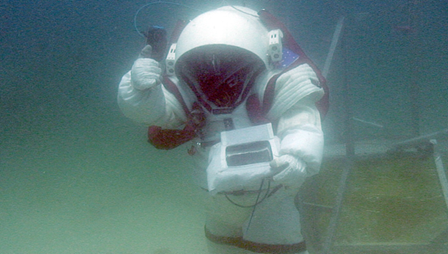 Astronaut on the ocean floor using a control and
communications device to interact with a robot
(Image: COMEX, France)

Knowhow gained from project Moonwalk may serve industries in the fields of oil & gas, general offshore and marine engineering and other applications where humans or robots are required to perform in extreme environments.

Contact: Markus Hauschild, PhD (hauschild@oshaliang.com), Patent Engineer, Osha Liang LLP; Peter Weiss, PhD (p.weiss@comex.fr), Department Manager, COMEX espace.  COMEX, a company based in Southern France, participated in the MOONWALK project together with six other partners. The company is a pioneer in human and robotic interventions in extreme environments, and still holds the records in offshore diving to 1,752 ft in the open sea and to 2,300ft in a pressure chamber.