Cover picture for the page 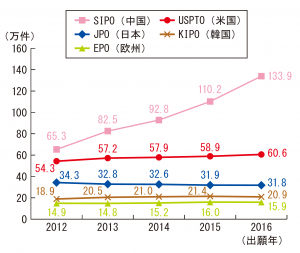 As explained in our previous newsletter, Japan has a long-term trend of decreasing patent filings, unlike the trends of patent filings at the other major patent offices.

In Japan, the number of patent applications has gradually decreased over the past decade.  According to the JPO Annual Report 2017, 318,381 patent applications[3] were filed with the JPO in 2016, with a decrease of approximately 0.1% from the previous year.  Thus, although the decreasing trend persisted in 2016, the decrease was relatively small.

In contrast, the patent allowance rate at the JPO has significantly increased in the past years.  According to the Annual Report 2017, the allowance rate further improved and reached 75.8% in 2016.  Interestingly, as shown in FIG.2 below, an inverse trend can be seen between the allowance rate and the number of patent applications filed with the JPO. 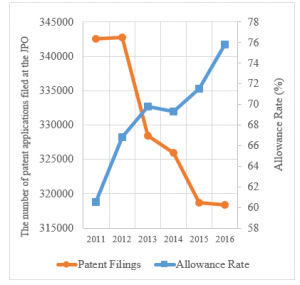 According to the JPO Annual Report 2017, 1,214 cases of post-grant oppositions (PGO) were filed in Japan in 2016.  The JPO abolished the PGO system in 2003, but it was reinstated in 2015.  Under the previous PGO system in Japan, at least 3,000 PGO cases were filed every year.  Therefore, the number of PGOs filed under the new system is significantly less than the PGOs filed under the old system.